Seniors Out and About in the Twin Cities: Saint Paul Saints

Oh, what fun this will be! The Minnesota Twins worked out an agreement with the Saint Paul Saints to be their AAA affiliate starting this year. This brings AAA baseball to the Twin Cities and will allow us to see rising stars move from one side of the river to the BIGS!

Fans will see some of the best baseball anywhere at two award-winning ballparks with just 10 miles between them. The partnership allows the Twins and Saints to extend the footprint of Major League talent to both stadiums when the Twins send players back and forth for rehabilitation or call up a hot new player. In other good news, the Saints will not be changing the fun programs that have made them a staple of summertime sports in the area. As the Twins Triple-A affiliate, the Saints will play a longer season than they did as an Independent Club with games beginning in April and extending until September.

The Fun Starts in April 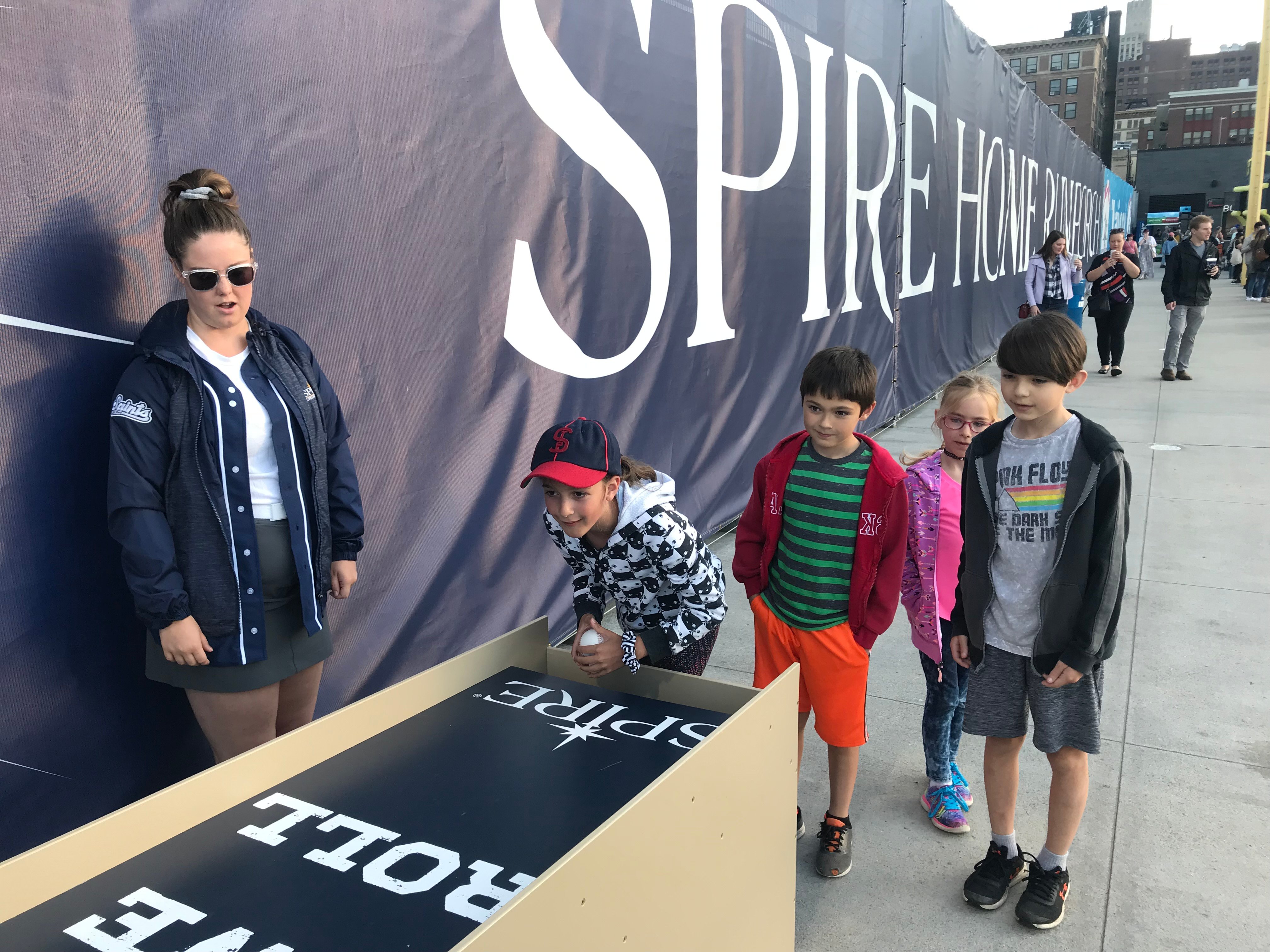 If you have ever been to a St. Paul Saints game, you know there is a much different feeling compared to across the river at a Twins game. There is no plan to change the atmosphere at the Saints games. A Saints game includes all the things that go on between innings as well as before and after the game. Mike Veeck leads an organization that believes you need a fun atmosphere to thrive at work, and he supports that in his culture to achieve professional and personal goals. Another notable co-owner of the team is Bill Murray. Bill enjoys the fun of baseball and has made some notable contributions to the Saints. Some of the fun events include Dog Day, Rock Reggae and Soul, Grease Sing A Long, tailgating, and more. Might we see Bill at Target field this year? The Saints open up April 6th against the Columbus Clippers, a Cleveland Indians farm team, at home in CHS Field.

The Saint Paul Saints play in the Lowertown area of St. Paul and have their own beautiful stadium for games. CHS Field is a 7,210-seat ballpark that has been the most heavily attended in all of professional baseball since 2015. Get your tickets early the Saints have been over 100% capacity for 15 seasons, including each year at CHS Field where they’ve averaged 112%. A lot of people must sit in that outfield grass. Like Target Field it was built with accessibility in mind so everyone can enjoy the game. 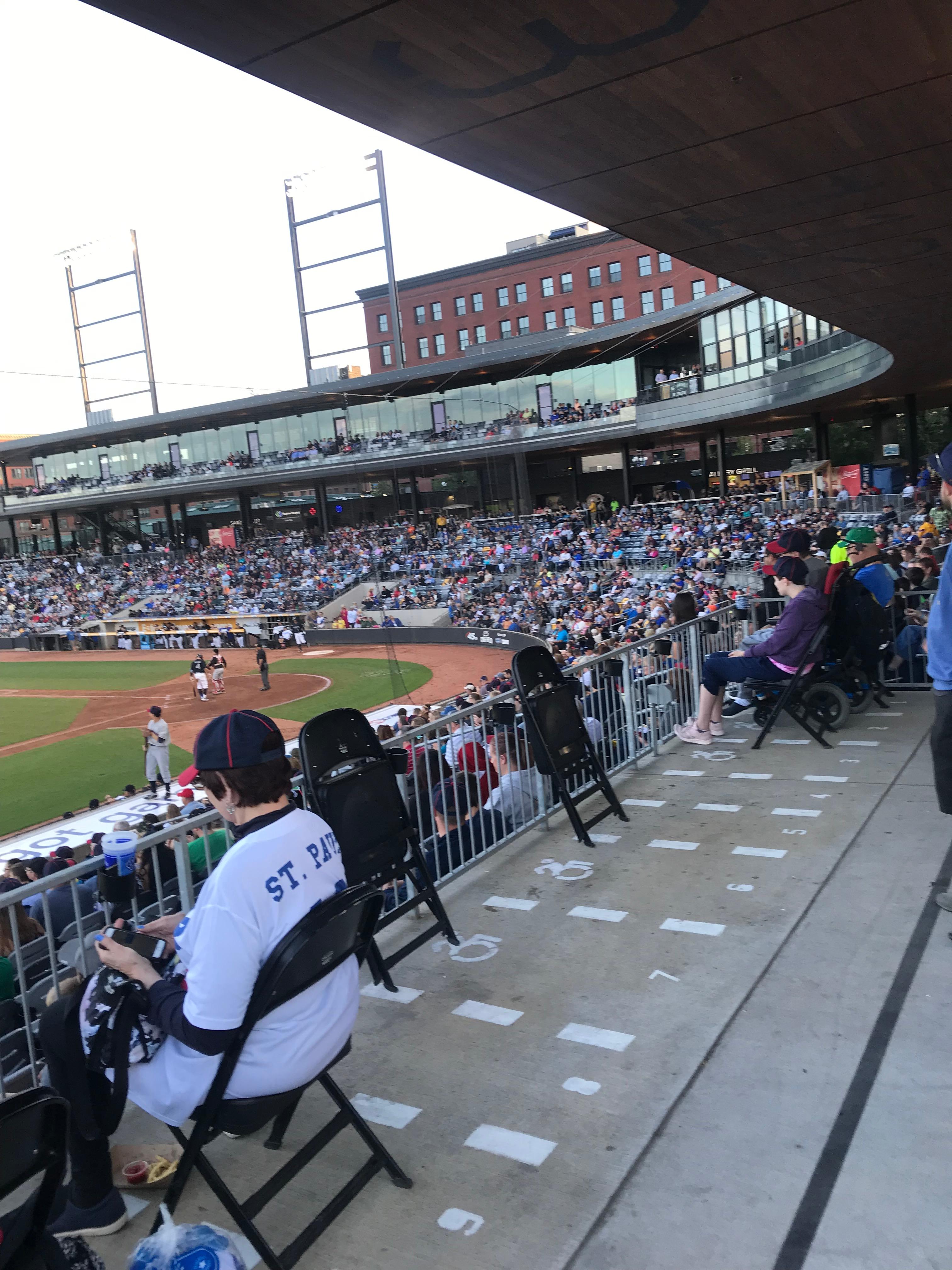 To buy tickets and/or get handicapped seating It might be best to call the ticket department at 651-644-6659 for assistance to find the best seats available. Some of the interactive functions are not working at the time of this writing. The drink rail seating, for instance, is easy access for seniors but they have handicapped accessible seating throughout the ballpark that may better fit your needs.

CHS Field is served by the Green Line light rail system and drops fans off at Union Depot Station which is less than a half-mile from the field. There are level sidewalks along the way. On game days you may be able to catch a ride on Capitol City Pedicabs, Your Saints Game Transportainment! The Pedicabs provide shuttle service pre & post game to the Tailgate Lot, Green Line, & Lowertown Ramp. There are also many ways to arrive by car or bus.

If things remain the same post-COVID, CHS Field has some exciting vendors like Muds Barbecue, Fries and Pies, and the Dog Park, to name a few, to prevent you from going hungry. There is also the ultimate tailgating experience provided by the Saints. In the left-field corner is a craft brew extravaganza with many local breweries represented.

The new and improved Lowertown Dog Park was a very important feature of the ballpark site that the community advocated for very strongly. The design team listened and made sure it was a priority for inclusion. It features a new dog-only drinking fountain, lots of space for Fido to run, a central area for dog owners to gather, lighting and will be open during typical park hours from sunrise to sunset. Chuck & Don's Dog Park is 17,585 square feet (nearly 60% larger than previous) and is handicap accessible. Keep an eye out, the Saints have had dog-friendly games in the past too.

What about the Independent Saints Team?

According to Robert Pannier of the American Association Daily, the Saints are considered one of the best-run teams in all of sports. Manager George Tsamis has built a winning culture that has led to four playoff appearances in the last six seasons. The “Saints” organization, the independent team, is going to move to a current minor league affiliate city that will lose their club when the contract is announced. His sources confirm that the Saints ownership loves owning an independent team and they are not giving this up. So, they will move this part of the operations to the new location. Fight on Saints.

If You're Into the Game

Unfortunately, Royce Lewis, one of the brightest upcoming stars for the Twins has torn his ACL and will be out for the season. Royce was the Twin’s number one draft choice in 2017 and this will mean he won’t play for 2 full seasons. The rest of the AAA lineup is rounding out for the club and they are excited about their prospects. There was no season in 2020 due to COVID so just how good the team will be is a bit of a guess--but isn’t it always?

Teams in the Saints division include the Columbus Clippers, Indiana Indians, Iowa Cubs, Louisville Bats, Omaha Storm Chasers, and Toledo Mudhens. There is an annual AAA championship series between the West and East teams, the Saints are in the east. The manager of the Saints will be Toby Gardenhire, rumor has it Ron will be at a lot of the games--and maybe get kicked out for old time’s sake!

In the south, they often say “How bout dem…” The phrase is used to break an awkward moment or mention something more pleasant. For instance in Georgia, “How bout dem Dawgs”. We have had our share of unpleasantness the past year--let’s be sure to say “How bout dem Saints” this year to keep things on the positive!