Emphysema is a lung condition that causes shortness of breath. In people with emphysema, the air sacs in the lungs (alveoli) are damaged. Over time, the inner walls of the air sacs weaken and rupture — creating larger air spaces instead of many small ones. Emphysema is a type of COPD. 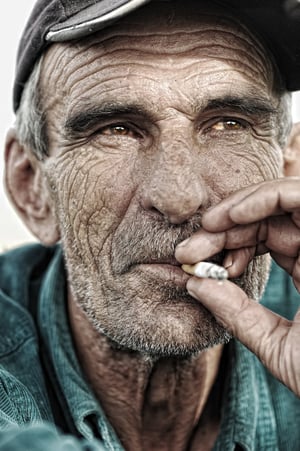 COPD or chronic obstructive pulmonary disease is an overarching term that can include many different diseases of the lungs such as bronchiectasis, chronic bronchitis, and emphysema. COPD interferes with normal breathing and is usually permanent and progressive.

In terms of emphysema, your lungs are damaged beyond repair. Emphysema can affect either the walls between the air sacs in your lungs or the air sacs themselves. This results in fewer and larger air sacs rather than the many small air sacs that your lungs are supposed to have. Emphysema is typically caused by smoking however other causes can be air pollutants, second-hand smoke, chemicals, dust, or other lung irritants. In regard to smoking, it is a preventable disease. Other irritants that cause emphysema are generally from long term exposure. In rare cases, people with COPD have a defect in their DNA, the code that tells your body how to work properly. This defect is called “alpha-1 antitrypsin deficiency,” or AAT deficiency. When you have this, your lungs don't have enough of a protein needed to protect them from damage.

Some emphysema can be brought on by work-related irritants. Things like welding smoke can bring on COPD. Here is a list of irritants and occupations that may have a higher prevalence of COPD as a result of exposures. People that have asthma or suffer from bronchitis may want to avoid jobs that would encounter these irritants.

There are three types of emphysema; centriacinar, panacinar, paraseptal. Centriacinar emphysema affects the alveoli and airways in the central acinus, destroying the alveoli in the walls of the respiratory bronchioles and alveolar ducts Panacinar emphysema affects the whole acinus. Paraseptal emphysema is believed to be the basic lesion of pulmonary bullous disease. Simply stated all of these lead to a loss of elasticity in the lungs and permanent enlargement of the air spaces called alveoli.

Detection and Phases of Emphysema

Emphysema is generally found in those less than 40 years old, and more frequently found in those of Scandinavian descent, commonly developing during years 30-50. Disturbingly the disease tends to express no signs and symptoms until 50% of lung function is lost, as a result of the airway obstructions beginning in the smaller airways. Only 1% of cases of emphysema are thought to be due to the deficiency of the alpha1-antitrypsin enzyme. Of course, once the symptoms appear the damage is irreversible. Patients diagnosed with emphysema may complain of difficult/labored breathing and reduced exercise capacity as their predominant symptom.

If your doctor suspects emphysema he likely will send you to a doctor specializing in lungs called a Pulmonologist. The Pulmonologist generally will order a CT scan to get a direct cross-sectional image of your lungs. This will give them a good understanding of how severe your lungs have been impacted. If appropriate they will then conduct a pulmonary function test. Pulmonary function tests (PFTs) are noninvasive tests that show how well the lungs are working. The tests measure lung volume, capacity, rates of flow, and gas exchange. This information can help your healthcare provider diagnose and decide the treatment of certain lung disorders. During the test, they likely will test the patient’s reaction to bronchodilators which helps them understand the relationship between permanent damage (COPD) and other issues like asthma.

There are two common measurement systems for COPD--The GOLD System and the BODE index. The GOLD system measures your breathing air volume--from the PFT test (FEV1) as compared to normal predicted breathing and designates your breathing into one of four COPD stages are:

The BODE index attempts to place your COPD into one of four survival stages based on body mass, airflow obstruction, shortness of breath, and exercise capacity by a point system.

Talk to your doctor to discuss these staging systems and how they may relate to your individual problem and treatment. We also have blogs on Pulmonary Rehabilitation and Exercise to discuss with your doctor.

Fore more information related to COPD, check out our website!